You've put the entire future of the nation on the line, for a nonsense 'deal' with Brussels to force the issue on some poxy little back-bench, internecine fight between the intolerant and slightly less intolerant little Englanders that lurk in the murky depths of your party; humourless, inhumane, selfish, pocket-lining privileged prigs, the lot of them.

I've said it before, and I'll be saying it again...you are the most inadequate cockwomble of a Prime Minister we've had in a century. If it wasn't for the hopeless bias of the print-media (and most of the televisual media it has to be said), you'd not even be where you are, and you're there with a mandate from less than one in four of us...the citizens you've cast into the abyss of a referendum on whether or not we should remain a part of the European Union. 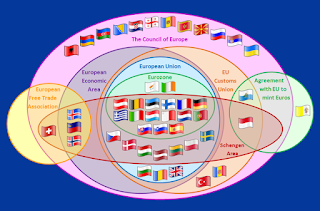 Note that the UK is already outside the two groups with the most parity. Any changes you genuinely wanted to affect could have been tackled without a referendum, or the need for a referendum, but you have decided to put the whole ship on a roll of the dice...and I'm not sure you aren't secretly hoping for an 'out' vote anyway!

We are already outside the Schengen Area group, we have already chosen not to join the Euro-currency group, yet you pontificate as if these are things you've just achieved! You are misleading the people Prime Minister...why?

The idea that the UK - in the 21st Century - can return to some Empire-building idyll of thrashing around Africa and Asia sticking it's flag in everything it likes the look of '...for Queen and Country!' is risible, yet it's what the 'out' campaigners from your own benches seem to be dreaming of?

The only slaves left to exploit are the citizens of the UK, and while you've done everything you can to render them as such, since 1979, that path will end in bloodshed. Indeed the notion that the UK will even survive this vote is a very moot point.

You appear to be a fool Prime Minister

Hugh Walter
I’m a 51-year-old Aspergic CAD-Monkey. Sardonic, cynical and with the political leanings of a social reformer, I’m also a toy and model figure collector, particularly interested in the history of plastics and plastic toys. Other interests are history, current affairs, modern art, and architecture, gardening and natural history. I love plain chocolate, fireworks and trees but I don’t hug them, I do hug kittens. I hate ignorance, when it can be avoided, so I hate the 'educational' establishment and pity the millions they’ve failed with teaching-to-test and rote 'learning' and I hate the short-sighted stupidity of the entire ruling/industrial elite, with their planet destroying fascism and added “buy-one-get-one-free”. I also have no time for fools and little time for the false crap we're all supposed to pretend we haven't noticed, or the games we're supposed to play. I will 'bite the hand that feeds' to remind it why it feeds.